Quickly leave this page by pressing the escape key or clicking here. 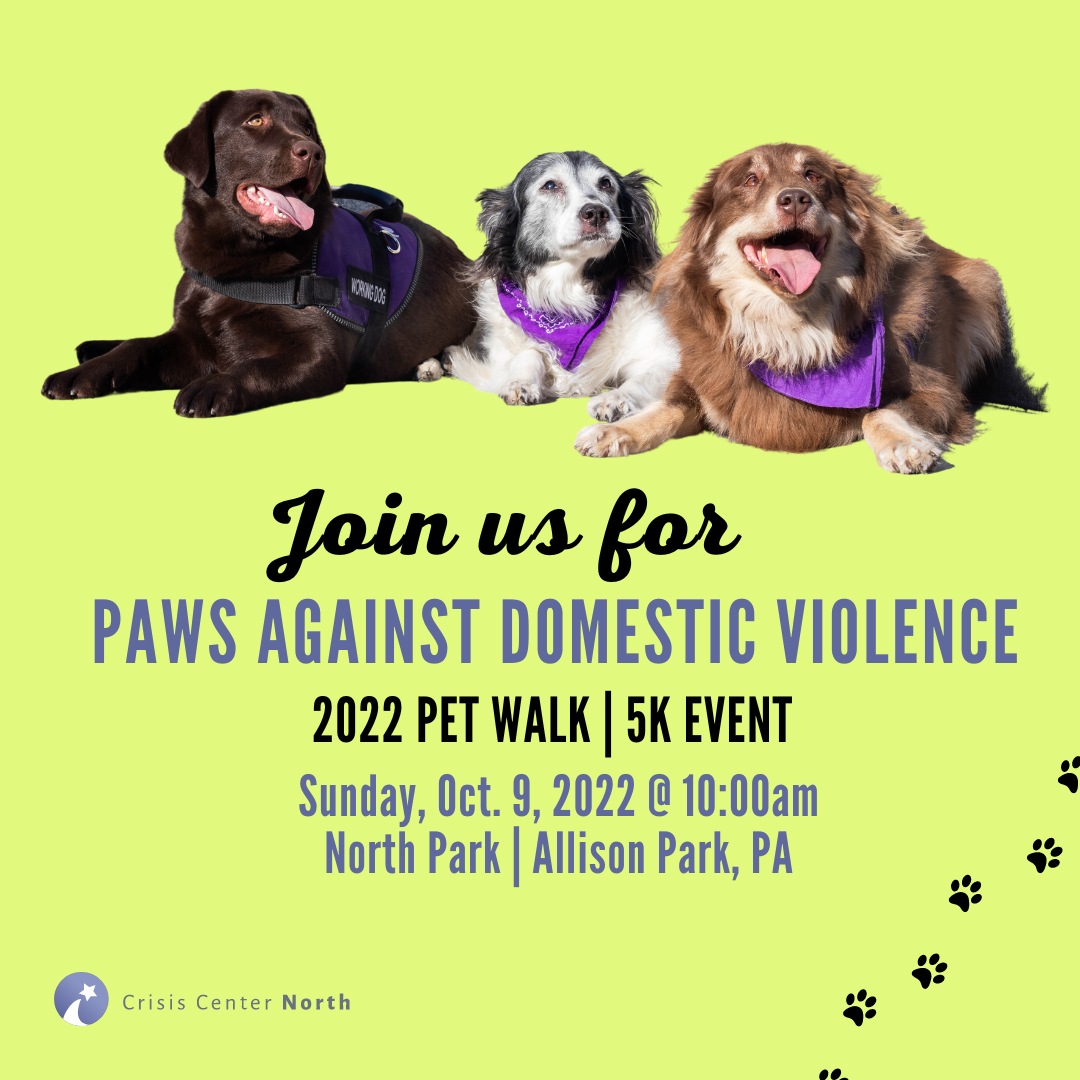 The fun-filled event will include activities for the whole family including pet photo booths, raffles, local vendors, and more! 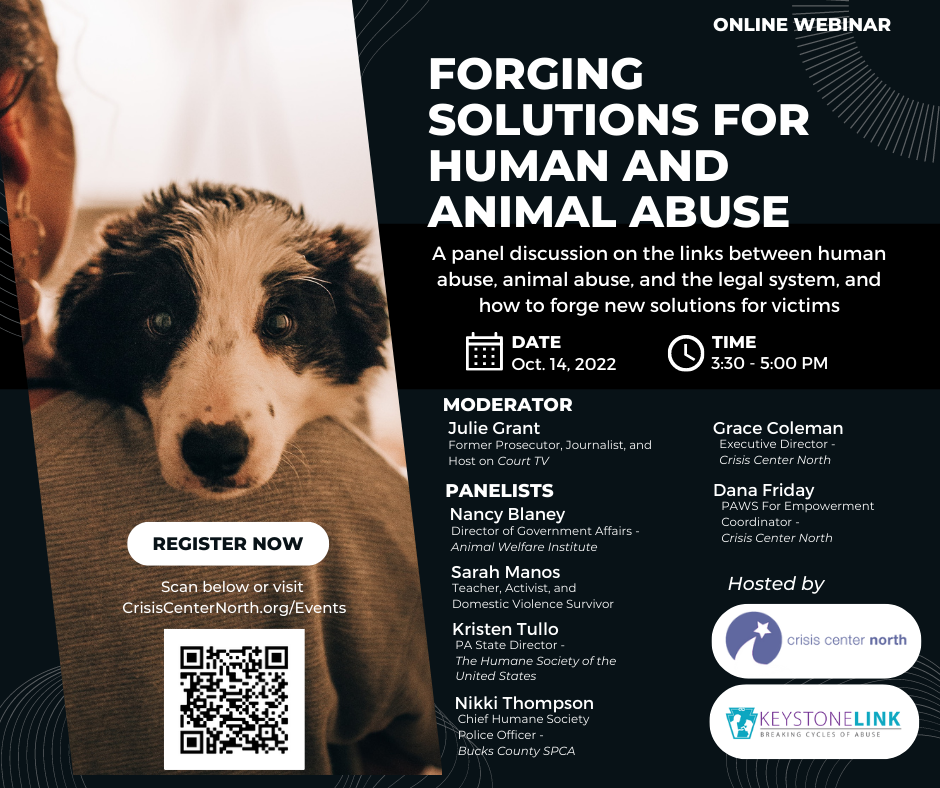 Join us for a panel discussion on the links between human abuse, animal abuse, and the legal system, and how to forge new solutions for victims of violence hosted by domestic violence counseling and resource center, Crisis Center North (CCN). This expert panel includes:

Julie Grant, licensed attorney, former prosecutor and trial expert, advisory board member of CCN's nationally recognized PAWS For Empowerment Program, and host of Court TV Live. Grant is also an award-winning journalist and is known by her fans to show genuine compassion for crime victims.

Nancy Blaney, who has advocated on behalf of animals for more than 35 years. She has been at the Animal Welfare Institute since 2007, where she is Director of Government Affairs. She works to improve animal welfare, the prosecution of animal cruelty crimes, and public awareness of the relationship between animal abuse and other forms of violence.

Sarah Manos, who is a teacher, social justice activist, CCN PAWS Advisory Board member, and survivor of domestic violence and animal abuse. Sarah's story of overcoming abuse and seeking justice for herself and her dogs made national news in 2022 when she won a landmark civil case against her perpetrator.

Kristen Tullo, who is the Pennsylvania State Director with the Humane Society. Kristen led awareness activities that led to the passing of house bill 1238, incorporating Libre’s Law, which is considered the most comprehensive animal protection legislation overhaul in Pennsylvania’s state history and the Animals in Distress law.

Grace Coleman, who has been Executive Director of CCN since 1999. During her tenure as director, CCN has served approximately 46,000 victims of domestic violence.

Dana Friday, who is the PAWS For Empowerment Coordinator of CCN. 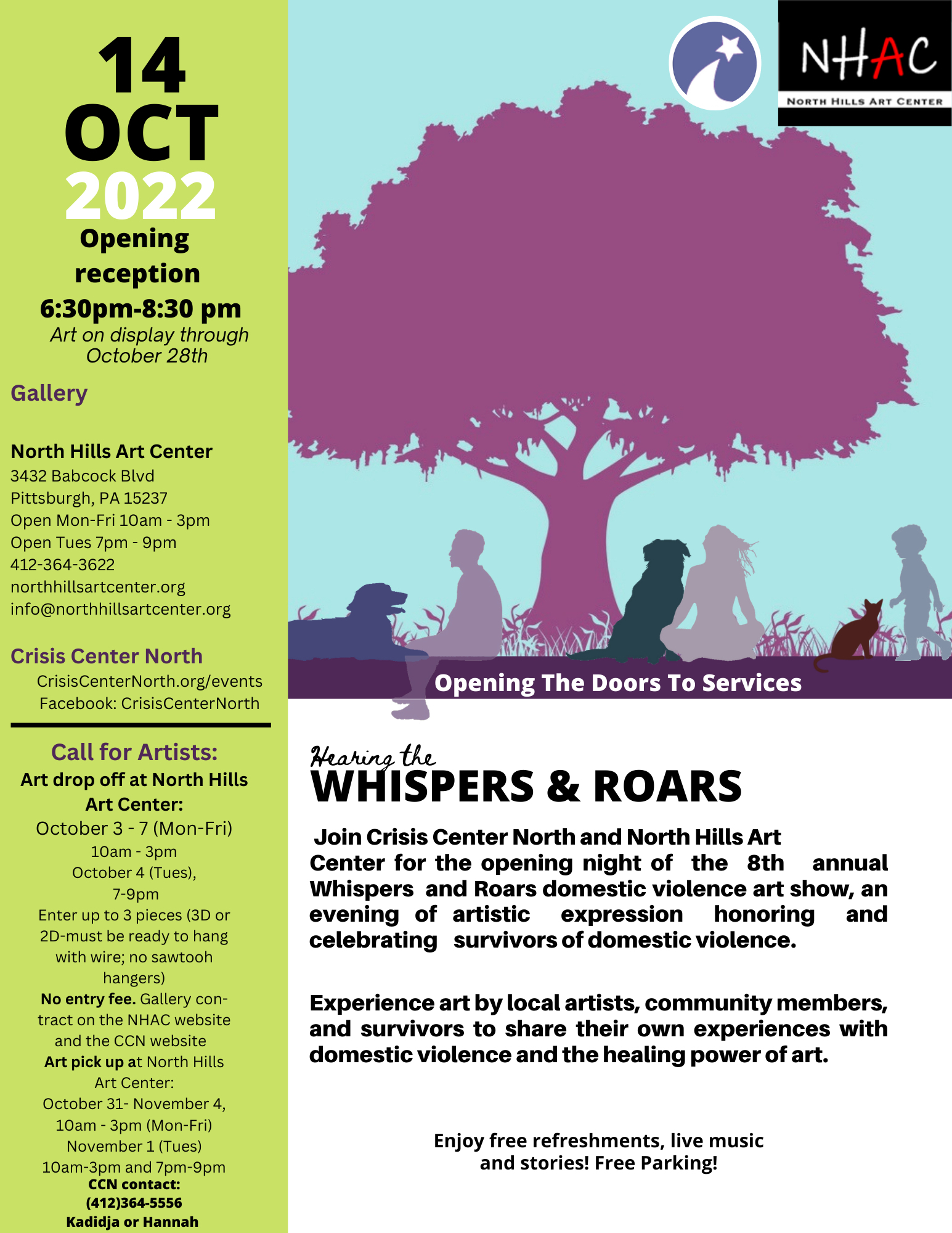 In honor of October’s Domestic Violence Awareness Month(DVAM), Crisis Center North is pleased to announce the annual Hearing the Whispers & Roars Community Art Exhibit, partnering with North Hills Art Center. This year’s exhibit, “Opening the Doors To Services,” will be held in person on the evening of October 14, 2022, beginning at 6:30 pm.

Over the past two years, survivors have had a harder time getting to safety, having a safe place in their home to contact an advocate for an appointment, paying their utilities or rent, finding transportation, and feeding their families. From job loss to fewer resources, these obstacles have become much more prominent over the past year and half, and CCN has continued doing as much as possible to meet each individual need.

This year’s Whispers& Roars focuses on the resilience we see in our clients each and every day as they weather through their storm and look toward the light ahead – the hope of a safer life. Help support survivors of domestic violence and join us for the opening night of Whispers & Roars. The evening will include a guest speaker who will share their DV story with us; music, and light refreshments or guests. We look forward to you joining us in person for this special annual event!

Please contact Kadidja at Crisis Center North at 412-651-2171 for more information.
‍
If you wish to submit art, please fill out the attached form. Art can be dropped off at the North Hills Art Center on Oct. 3-7 from 10am-3pm and also 7pm-9pm on Oct. 4. All art must be ready for hanging and include printed form (download here).